Ethiopian Recipes With an Israeli Accent

“When I realized I wanted to create food, I also realized I needed to return to my roots, to the food I grew up eating,” says 31-year-old chef and artist Elazar Tamano. Born to Ethiopian immigrant parents and raised in Kfar Saba, Tamano says he was always attracted to the kitchen, but did not dare approach it when he was younger. His first culinary experience was as a cook in the army. Since then, he’s worked in bakeries, cafes, and at Dalida restaurant in Tel Aviv, which is “where I acquired the tools to understand how food is created, not just cooked,” he says.

In the past three years, Tamano started cooking Ethiopian dishes for events and, recently, on the hit show “The Next Restaurant.”  “It took me a long time to gather the courage to prepare injera, and even then, it took a long time until I actually succeeded, 18 months ago. Today I can prepare it in my sleep,” he says.

The term “creation,” in all its articulations, comes up often in conversation with Tamano. “When I speak of the creation of food, I literally mean creation, like that of an artist.” Art, even before the kitchen, has played a significant role throughout his life. He taught himself to paint and sculpt, and is currently a second-year art student at Minshar School of Art. “My dream is to continue to evolve and create art and food. To acquire more tools for creation and self-expression. To explore more and more,” he says. Indeed, a deep dive into his recipes reveals that each ingredient is a statement expressing an emotion or corresponding with experiences, smells, flavors and memories that he is interested in preserving and passing on.

Tamano has a hard time defining his cooking style, but sums it up: “I think of it as contemporary Ethiopian food, or Ethiopian food with an Israeli accent.” It’s built on a foundation of both classic Ethiopian cooking and Jewish Ethiopian food, which came from villages. The latter is spicy, says Tamano, and “In contrast to the rest of Ethiopia, where fish is widely used, Jews raised goats and sheep and grew plenty of legumes and vegetables in these rural areas, all of which are naturally reflected in the cuisine. Also, in Ethiopia raw meat is traditionally eaten — yet is nonexistent in Jewish Ethiopian cuisine.” In his eyes, the cuisine also has earthy “clay flavors,” as he puts it; “Jews were masters of agriculture. At a certain point their lands were taken from them because they refused to convert to Christianity, and in order to make a living they took on craft-making: pottery, woven straw dishes (which they invented), sculptures, etc. They also made clay cooking pots, which give the food a distinct flavor, distinguishable from the traditional Ethiopian metal cooking pots.”

Tamano’s colorful brunch spread combines dishes from both the Jewish and Christian Ethiopian cuisines, filtered through his kitchen. There’s pumpkin steak on yellow split pea puree, kifto or steak tartare with seasoned clarified butter, a spin on doro wat or chicken in a thick and spicy sauce, an Ethiopian honey tart, and the injera he spent months perfecting.

Many of the recipes call for ingredients like teff flour, berbere, and other staples of the Ethiopian kitchen. They can be found at shops like Sod Hakesem in Yehud or at Cafe Asif’s local deli. 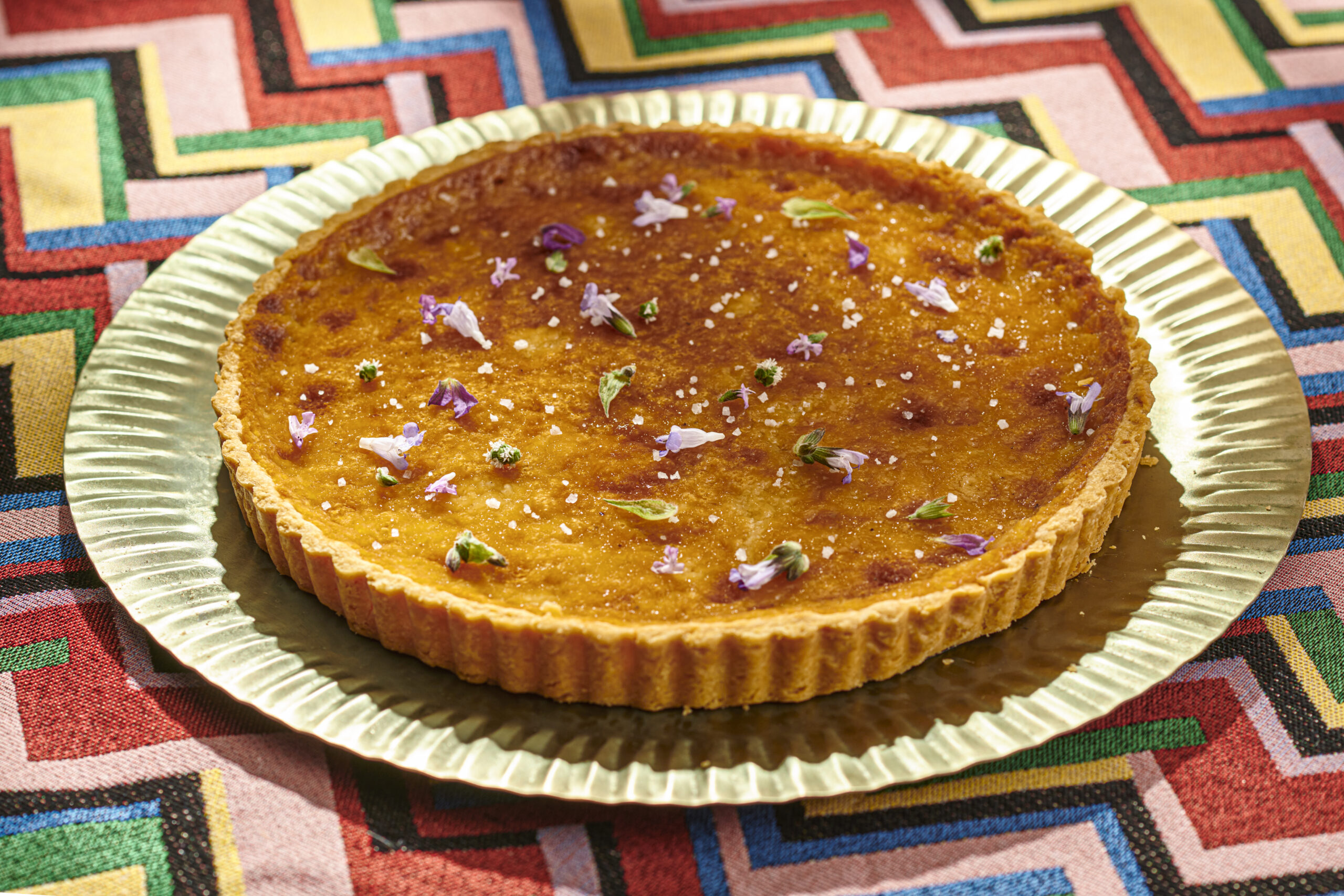 Inspired by a visit to his father’s village, chef and artist Elazar Tamano created this recipe for an Ethiopian honey tart. 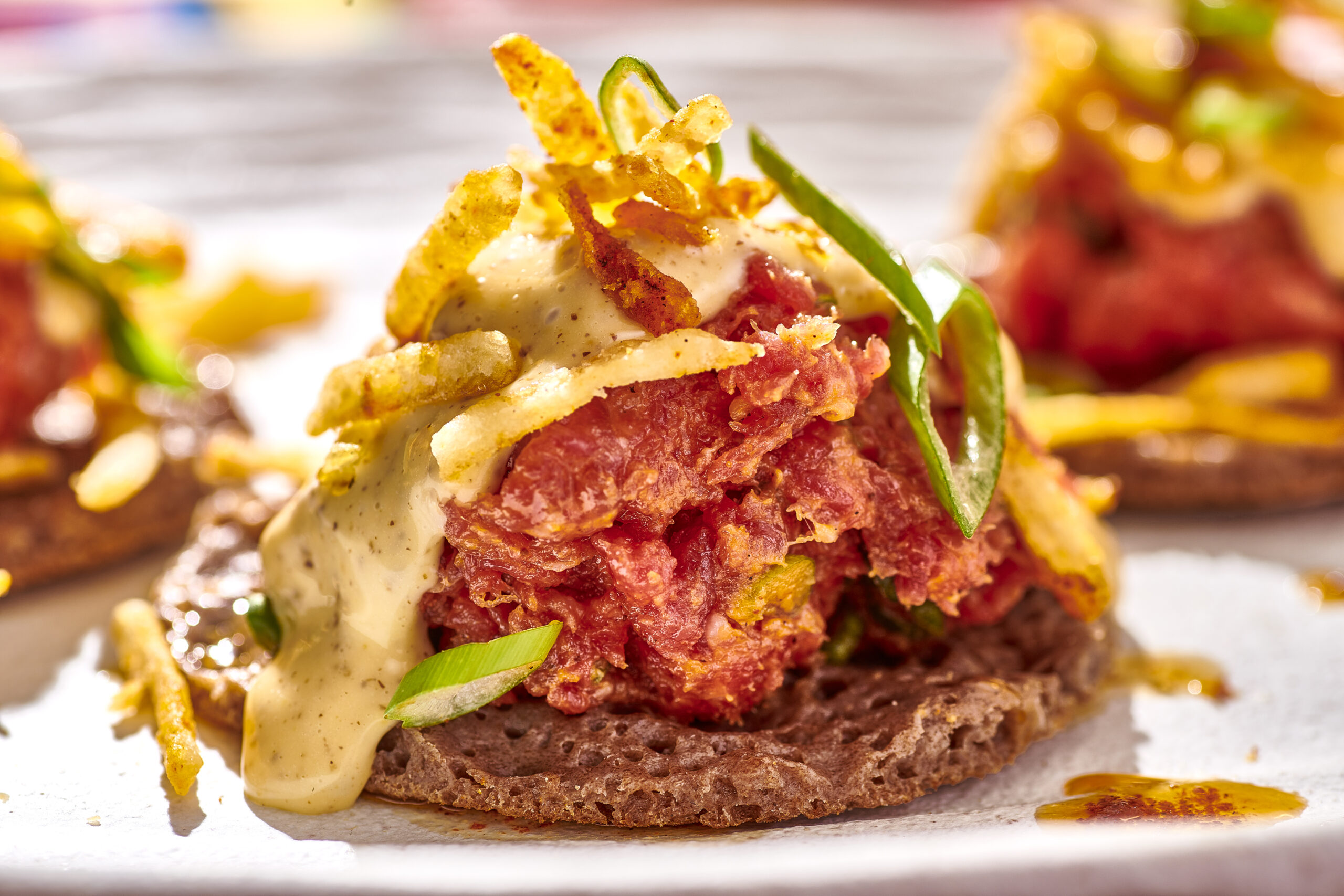 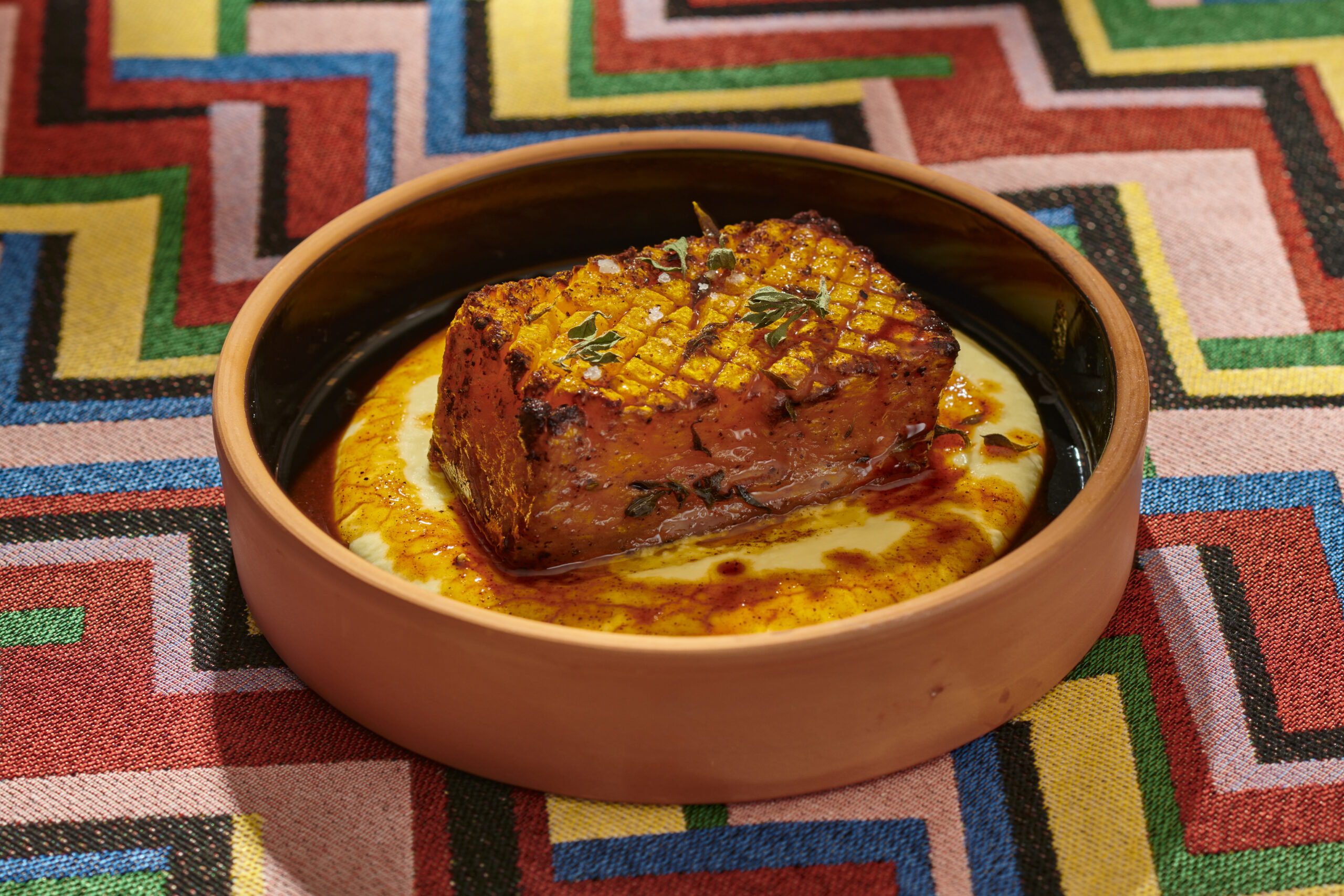 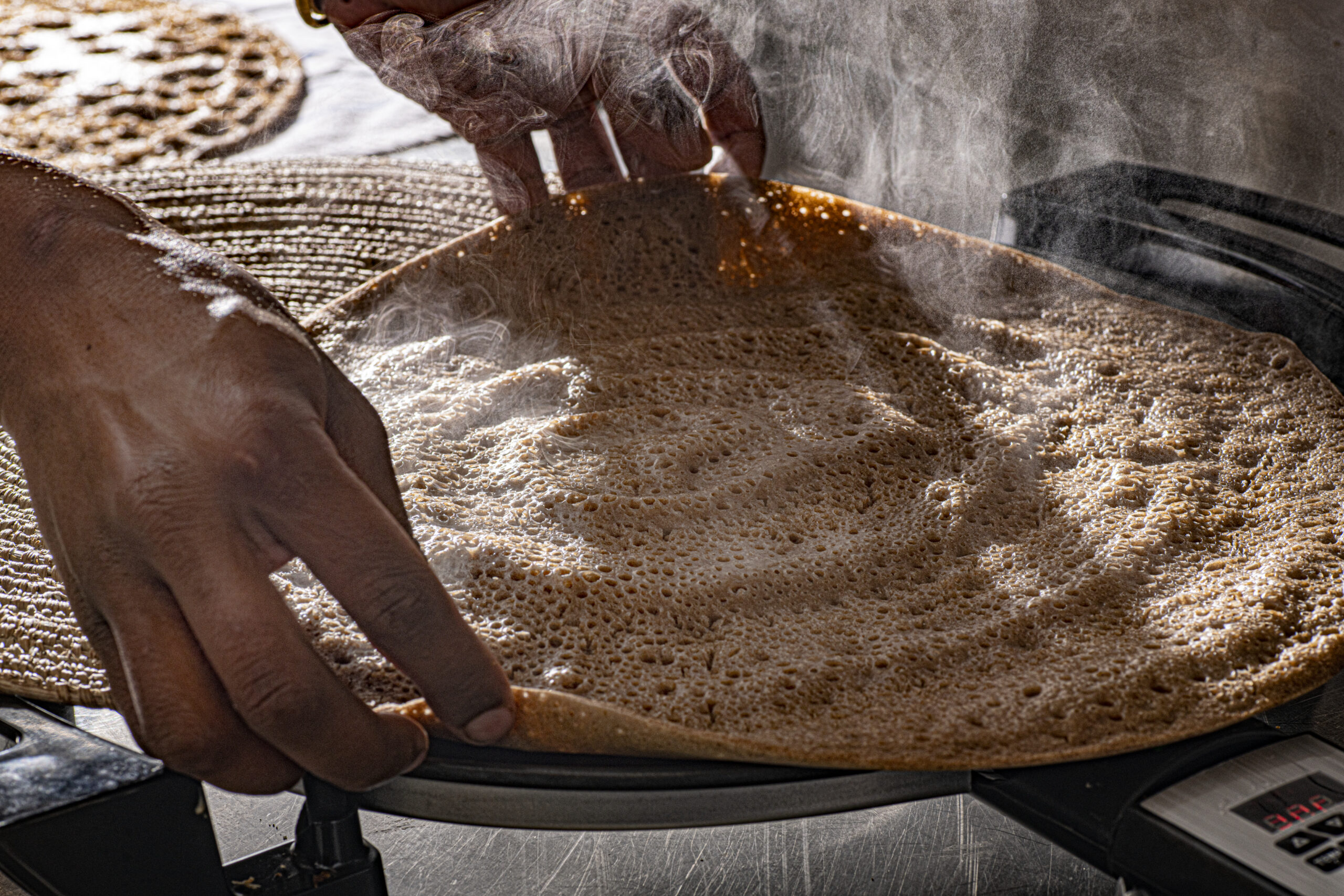 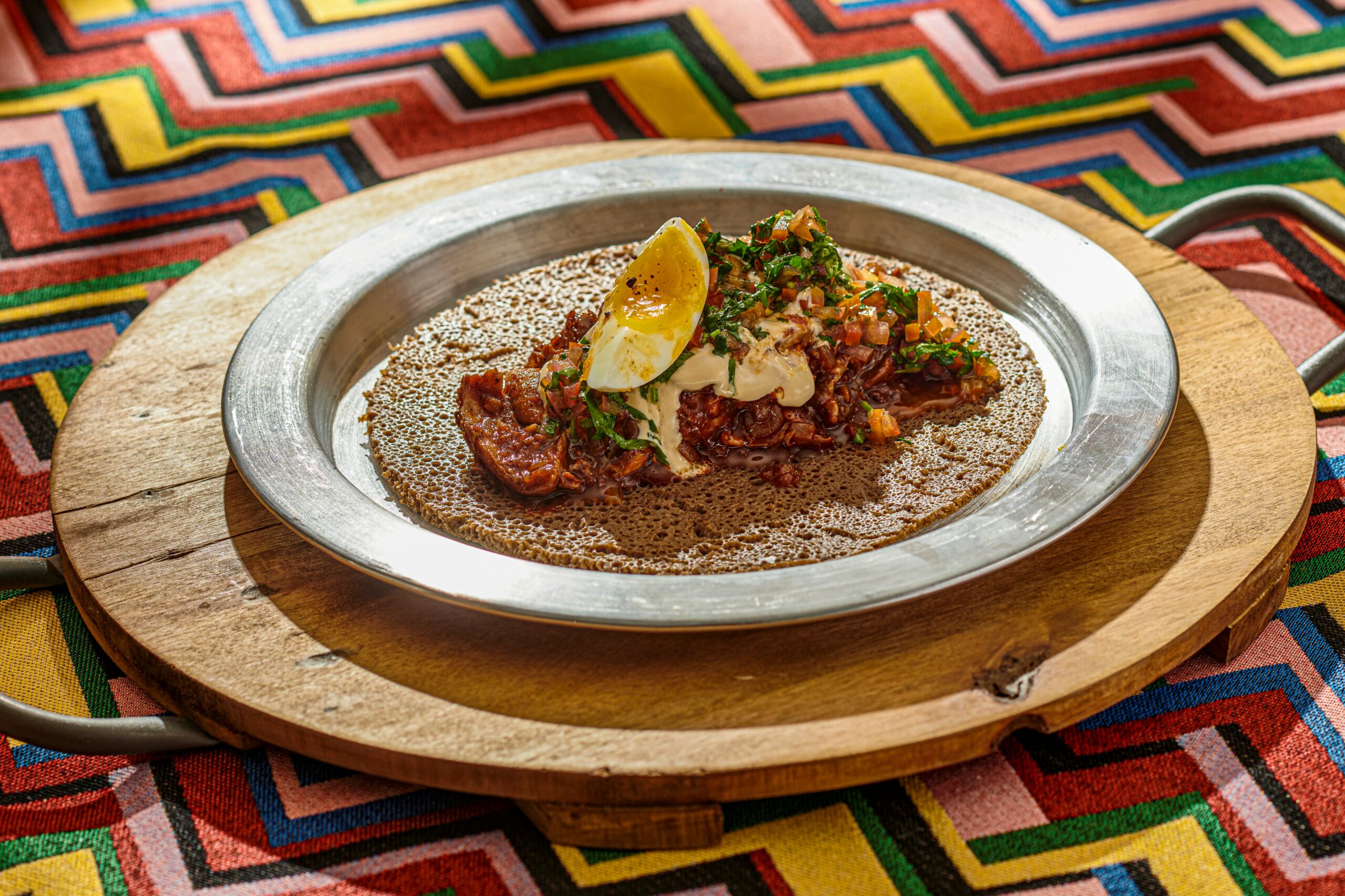